I am not an Okinawan, should I really eat like one?

Nearly all of us have tried a diet at some point in our lives. We are bombarded with information on weight loss, healthy lifestyles, supplements, and many other lifestyle choices. It is nearly impossible to decipher all the facts, figures, recommendations, and studies. Our friends make suggestions, so do family members. One doctor suggests staying away from red meat, while another reminds us of the low iron count in our blood and suggests a nice juicy steak as a solution. Can we really eat ourselves to a century? Do diet choices really improve our chances of dancing at our great grandchildren’s weddings? Let’s look to the Okinawans for answers.

What does the evidence tell us?

The Okinawa centenarian study is a population study, which began in 1975. After a full baseline physical exam was performed, the subject was followed over the course of their remaining life. Diet and exercise patterns were observed, as well as numerous other factors. Overall, 900 hundred centenarians have been studied and many solid pieces of evidence have emerged. First, it’s clear that there is a large genetic component to a long life. Rough estimates suggest about 30% of the human lifespan depends on genes. Yes, people living past 90 years of age tend to cluster in families. This is not news I am personally ecstatic about. I don’t come from a long line of centenarians. But there is hope! The second, and overwhelmingly more important factor to our longevity, seems to be diet and lifestyle choices, accounting for about 70% of our longevity. People in Japan live on average 83.7 years, compared to 79.3 years in the United States. The men heavily weigh down this statistic, as women in Japan live 86.8 years on average (I guess boys will be boys). Okinawa in particular, enjoys the greatest amount of centenarians in the world, who also happen to live significantly healthier lives overall. They are affected by significantly less chronic conditions, are less likely to be afflicted with Alzheimer’s, and have some of the lowest cancer rates in the world. Food is not the entire piece of the puzzle, but evidence suggests it’s a big part. So, what should you put on your shopping list?

Living to a century

First, it seems how much you eat is equally as important as what you eat. The average Okinawan consumes about 1,800 calories daily. I will have to lay off that cheesecake! Eating a calorie restrictive diet has been shown in numerous studies to lengthen lifespan. But where those calories come from seems to be the deciding factor. The Okinawans get most of their calories from fruits, vegetables, rice, noodles, other whole grains, legumes and beans. These foods are staples of the diet, are eaten daily and in multiple portions. The rest of the day’s calories usually consist of healthy fish, rich in Omega 3’s, soy products or dairy, and nuts. Less frequent diet staples are shellfish, eggs, and poultry. Healthy oils like olive and avocado are consumed in moderation. Does something stand out? It seems Okinawans almost never consume meat, sweets, and other animal products. Take a look at the pyramid below for a more detailed view of Okinawa diet choices. 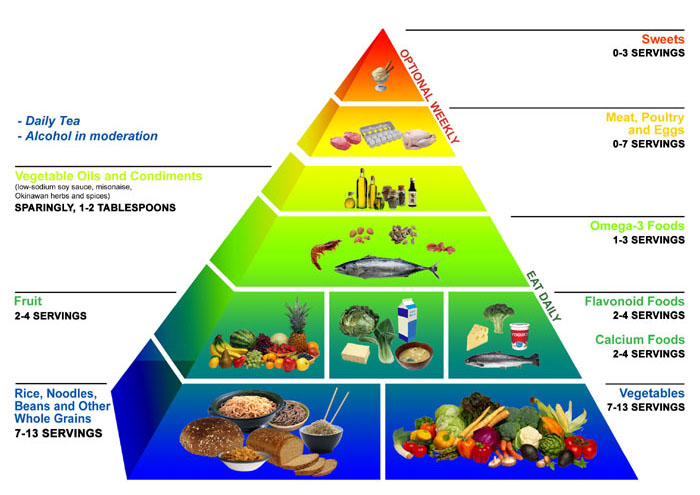 The evidence suggests that getting most of your calories from whole foods, vegetables, beans and legumes, will almost certainly extend your lifespan. We will be writing in more detail about longevity diets from around the world. For the time being, unfortunately, it seems less is more when it comes to food.